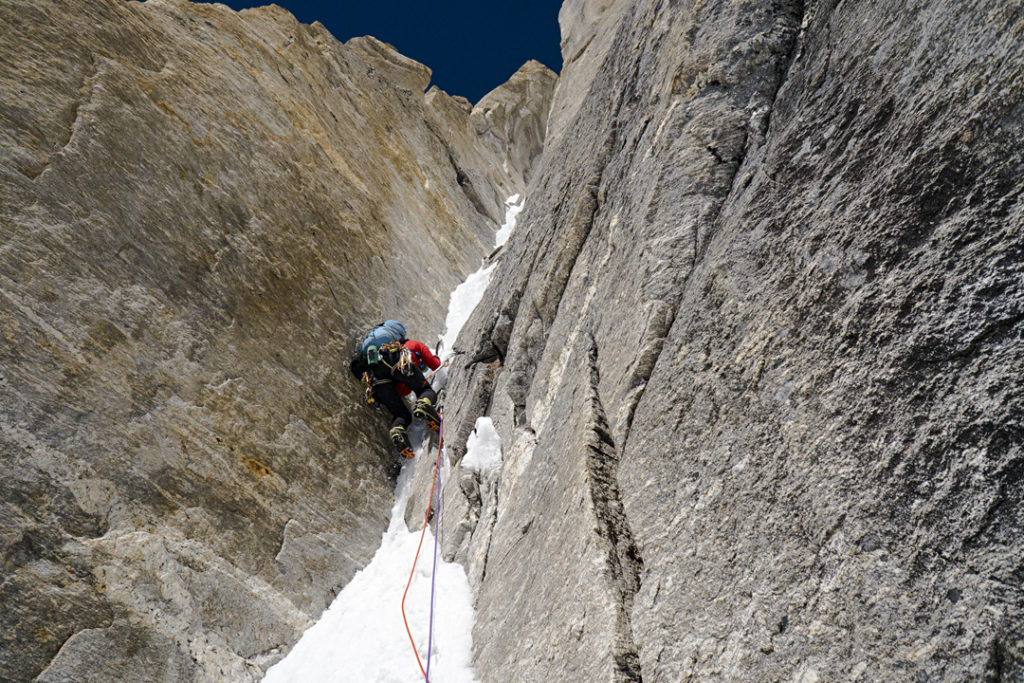 Climbers Chantel Astorga, Anne Gilbert and Jason made the first ascent of the Southwest face of Nilkanth between 29th September and 2nd October 2017. The following post written by Chantel Astorga is a riveting reflection of their ascent. The journey was managed by Ibex Expeditions.

Between September 29 and October 2, Anne Gilbert Chase, Jason Thompson, and I made the first ascent of the southwest face of Nilkanth (6,596m, a.k.a. Nilkanta or Nilkantha).

Anne Gilbert, Jason, and Caro North had planned to attempt the southwest face in 2015, and they climbed most of the peak’s west ridge, which would have formed their descent route. However, the weather did not allow them to set foot on the southwest face (AAJ 2016).

Two years later, Anne Gilbert and Jason were awarded an AAC Cutting Edge Grant for another attempt on the unclimbed southwest face. They invited me to join, and with assistance provided by Ibex Expeditions, we arrived in mid-September at a 4,115m base camp directly below the south face. The monsoon extended well into the month, bringing warm temperatures and heavy rain.

Access to the southwest face involved 1,000m of ascent over gravel-covered slabs, and featured brief periods of exposure to overhead objective hazard. Straightforward glacier travel then led to the foot of the wall. Our only opportunity to acclimatize through the unset- tled weather was to ascend these approach slabs and establish an advanced base below the wall at 5,180m. At that time, the first third of the wall looked in poor condition, with high temperatures melting the ice and exposing loose scrappy rock. Rain only began to turn to snow around 5,100m.

On September 27 a long weather window began, and although not well acclimatized, we decided this would be our opportunity. We left advanced base on the morning of the 28th, finding just enough ice on the lower face to afford reasonable passage. There were a few pitches of mixed climbing up to M5, simul-climbing on steep snow slopes, and a steep WI5 ice pitch. Our first bivouac was at 5,670m in a moat.

On day two we pitched most of the climbing, which consisted of technical mixed ground and some beautiful steep ice. We were unable to locate a tent platform that evening, so we chopped out a bench at 5,944m and succumbed to a sitting bivouac under the stars. On most days the mountain would see convective cloud buildup and light precipitation during the afternoon hours.

Day three was the crux. We needed to find a way to the top of what we’d dubbed the Castle, a steep granite formation. As we got nearer, we saw that our intended route would require big-wall tactics. Instead, we opted to navigate around the Castle’s right side and found a delicate ice runnel leading into an overhanging cave. To exit, we tensioned over a slab and gained access to difficult mixed ground; this was followed by a steep ice pillar, eventually depositing us on top of the Castle at 6,248m. The bivouac here was the coolest ever, the exposure and views unforgettable.

Anticipating more straightforward climbing, we hoped day four would take us to the summit. However, the technical ground continued almost to the top. The rock quality deteriorated and route-finding became more difficult. By evening we had arrived at a false summit. The summit ridge looked steep, difficult, and exposed, so we opted to descend 30m to a flat bench and set up camp at 6,523m, the highest elevation any of us had slept.

After a cold and restless night, we awoke to another beautiful morning, sluggishly melted snow for water, and packed our bags to complete the summit ridge. This turned out to be straightforward, and a couple of hours later we were standing on the summit, psyched. Our route, Obscured Perception (1,400m, VI WI5 M6 A0 70° snow), had overall been of very high quality.

The west ridge was still fresh in the minds of Anne Gilbert and Jason, so we hoped for a fluid descent. We downclimbed névé ridges and made about 10 rappels, with Anne Gilbert doing a great job remembering the locations of the previously rigged anchors. Fifteen hours later, at around 2 a.m., we made it back to our advanced base, rested a while, and then continued our descent to base camp later in the morning.