Rafting in the Zanskar: Rapids On Roof Of The World

Journalist Krishna Prasad wrote a hilarious personal account of his experience rafting in the Zanskar river, Ladakh back in 1997. The expedition was outfitted by Ibex Expeditions. Here’s a read. 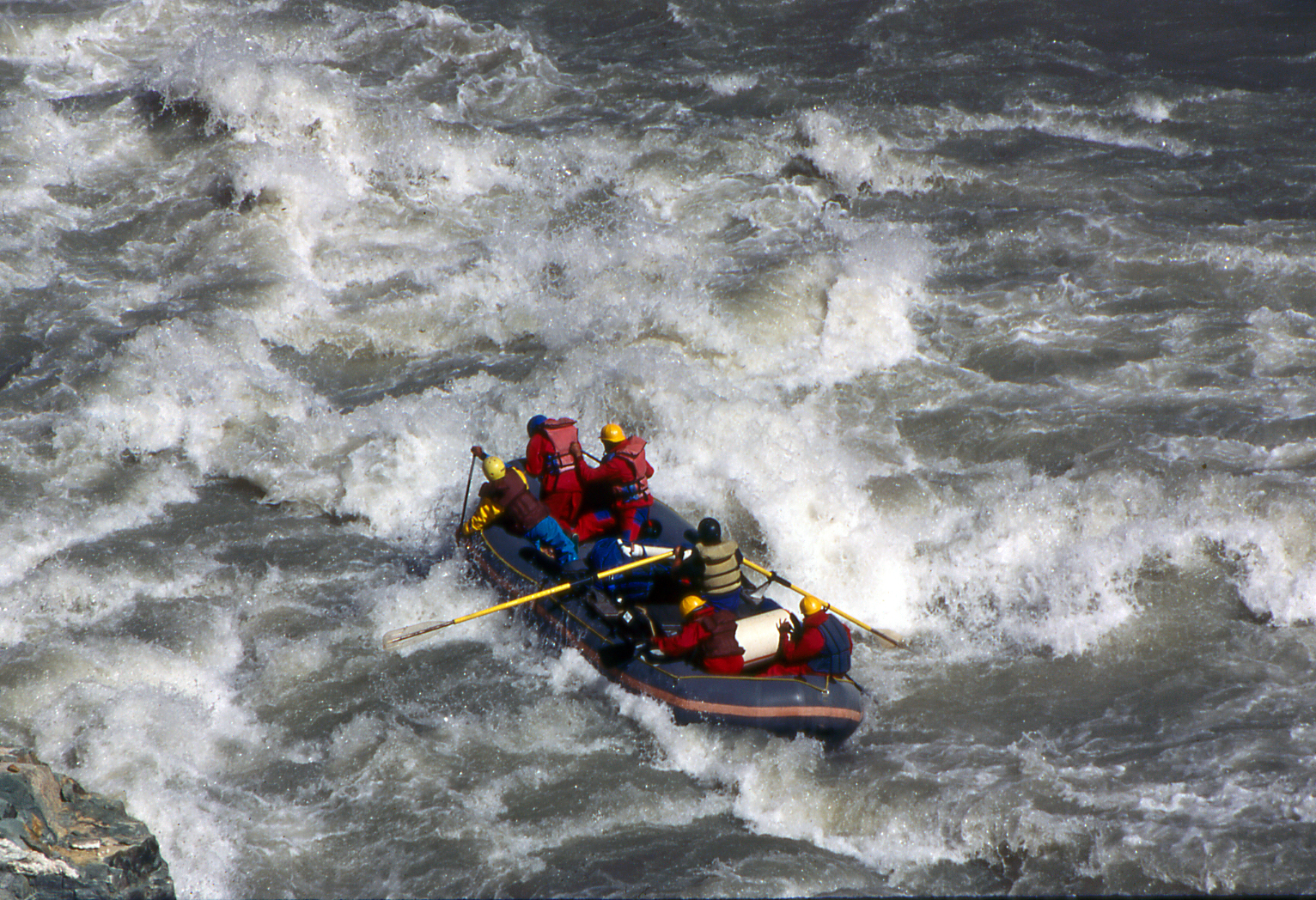 The article was originally published in The Outlook magazine on 20th October 1997.

FLYING into the world’s highest civilian airport, the first specks of snow on the peaks of the Ladakh and Zanskar ranges look like evidence of a bad whitewash job by The Great Painter; clouds hanging like crumpled cobwebs.

Dunk the Kashmiri stereotypes. Get used to the idea of a desert 9,000-11,000 ft above sea level. Broad plains scoured by dust devils. Gompas (monasteries) of the Mahayana Buddhists. Yak, ibex, dzou, ponies, blue sheep. Snow leopard for the lucky few.

Like the Grand Canyon, the peaks, the rocks, the designs, the caves, the colours, the contours, the flowers, tell a story city-slickers cannot sadly understand. Then, the splash and surf of white water rafting and a chance to connect. Paradise!

‘ Juley ‘ (namaskar). After two harrowing days on an army ambulance stretcher, from Leh to Kargil (235 km) and from Kargil to Padam (247 km), it’s a relief to get off from the world’s highest civilian roads and sail, leaving behind the dust and the grime.

Water! Pure, snowfed. Brrrr. “The coldest I ever got into,” wails American kayaker Jacques Barker, 30, who leads the four rafts. “Shut up and fly,” says the t-shirt of river guide Glen Upperman, 37. As the boats snake their way, exultant villagers run down the huge mountains.

‘ Juley !’ We’re probably the last outsiders they’ll see for the next six months. “The valley of Zanskar. So clean, so pure, untouched by civilisation, untouched by greed. Undisturbed harmony,” writes Shoury Kuttappa, a Rashtriya Indian Military College (RIMC) cadet, in his logbook.

Itching to get away from the rat race? Only here, they say, can a man sitting in the sun with his feet in the shade suffer from sunstroke and frostbite at the same time! No mobiles. No “I love Priyanka” on the rocks. No broken Kingfisher bottles on the beaches. No hotels. No roof over your head. Just you and the Milky Way, and a chance to notice/realise what a small part you are of this universe.

First stop: Zangla. It’s lonely out here. So the oneliners are out. Somebody says he’s never seen so many stars in Delhi. “That’s because so many of them are on the ground.” “Plop, plop.” The sound of the ripples. Music!

More real world. No filter coffee. No newspapers. No television. No hot shower. Just the chatter of the birds, the gush of the water. Just you and your toilet roll. Somebody takes a Coca-Cola can along. Ha, ha. “Coke reaches parts other colas don’t.”

Without the disgust of reading which arrested politician/ industrialist/ editor has developed “chest pain” (is it true police vans are being sold to buy ambulances?), what do you do as you wait for the big fella to pop up from behind the peaks? “Reflect,” says Mandeep Soin of Ibex Expeditions. “Cut off from the luxuries, you begin to appreciate the small things in life. ” The half-cooked dal. Kit-Kat. Radio China. Khichdi. Milkmaid. Maggi!

Cadet Kuttappa shows signs of HAPO: high-altitude pulmonary oedema. Is airlifted out in style, after Captains Manuvendra Gupta and Rajan Khosla have used atta to draw an ‘H’ for the air force copters to land. RIMC’s commandant Colonel Arun Marmagain says they do it with cocoa in Siachen. Cheers! “Work sucks, so I’m going to the river,” says Glen’s t-shirt. He’s been sailing for 17 years. Why for? “The freedom of not having to go to office. Mine is a full-time job to stay out of a full-time job.” The Zanskar magic unfolds. “The Grand Canyon has white water but the landscape makes the scene there. These peaks, rock formations, designs, colours, contours are something I have never seen,”says Jacques. The Americans are dreaming of six-packs. Mandeep talks of a new beer called Henninger. “Let’s do it when we get back,” he says. “At 11,000 ft, we already have a headstart to get high.”

The first big rapids. Class 3 on a scale of 1-5. The water kicks at the underside of the raft like a foetus would a womb. There’s a thrill in approaching a rock one moment as if to hit it, topple over, and go under, and then around it safely, the next. Much fun naming them. Pamela Anderson’s a big favourite. They’re awesome, the rapids.

Long day. The boys count 17 rapids. Next stop Chilling just doesn’t seem to arrive. “Around the bend,” says river guide Sanjay. “Around the next bend,” says the other guide Navraj. Then the next.

At such high altitudes, cold temperatures, after a hard day rowing, guide Rajeev Thapa says he has a wolf’s appetite. But the RIMC menu is simple, uncomplicated, and completely unbalanced. Aloo and puri/roti (heated up) for breakfast, aloo and puri/roti (packed) for lunch, aloo and puri/roti (hopefully hot) for dinner. Oneliner: “No wonder we haven’t had the stomach for a war in 25 years.”

Shaukat Sikand of Markhor Adventures is pretty miffed that the RIMC boys didn’t clean up the debris at the camp site last night and again this morning. There is a lecture from Mandeep to the kids: “Take nothing but photographs; leave nothing but footprints.”

“Adventure is madness recounted at leisure,” says Ian Chappell, quoting old buddy Rodney Marsh. After behaving sanely for three days, there’s a thrill in throwing caution to the winds on the last and pushing the limits of safety that defies logic.

There’s a thrill in toying with life and feeling a class 4-plus rapid enter the lungs. The heart goes to the mouth, and the mouth elsewhere, as the rapid hits you in the eye like a wall.

Nimoo, where the Zanskar meets the Indus and the expedition is to end, seems further and further away. Around the next bend. “My entire life is a long boat ride,” says Jacques.

Wet clothes all round, as we partake of cold pakodas and nimboo juice. One last oneliner: white water rafting is the most fun you can have with your clothes still on. The Ultimate Orgasm.

The article was originally published in The Outlook magazine on 20th October 1997.

To know more about our rafting expeditions, contact us at ibex@www.ibexexpeditions.com