Madhya Pradesh: Trekking through the Tranquil Heart of India 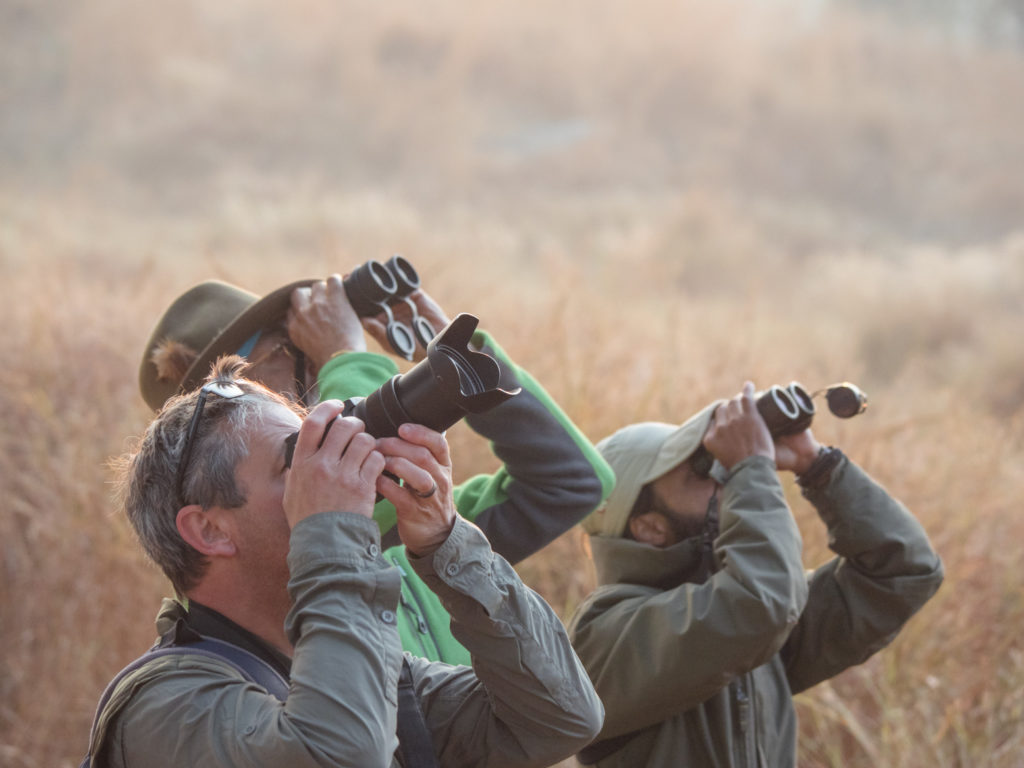 India with a difference: without noise, people and air pollution.  Traveller Simon Schöpf followed in the footsteps of the Bengal tiger through the central Indian state of Madhya Pradesh, far off the beaten track. He writes about his experience visiting Satpura National Park during AdventureNext, with Ibex Expeditions. The article was originally published in German magazine Berg Welten. The essay below is a translated version.

Road traffic is a single tough-flowing mass, in which the individual parts seem to peel off magnetically, but which devours everything that does not fit seamlessly. The olfactory sensation oscillates remarkably fast between landfill and masala curry. The acoustic backdrop would not surpass an 80s punk band on Ecstasy, the everlasting basic tenor : hub, hub, huuuub . And in between, a sacred cow always sleeps somewhere. Whoever travels through India, has to demand a lot from his sense organs.

So far the well-known picture of India. That’s true, but nevertheless the country with the incredible 1.3 billion inhabitants has something like a quiet side. They exist, the lonely and relaxed spots on this super-continent of the senses, one of which is the central Indian state of Madhya Pradesh – “the heart of India.” 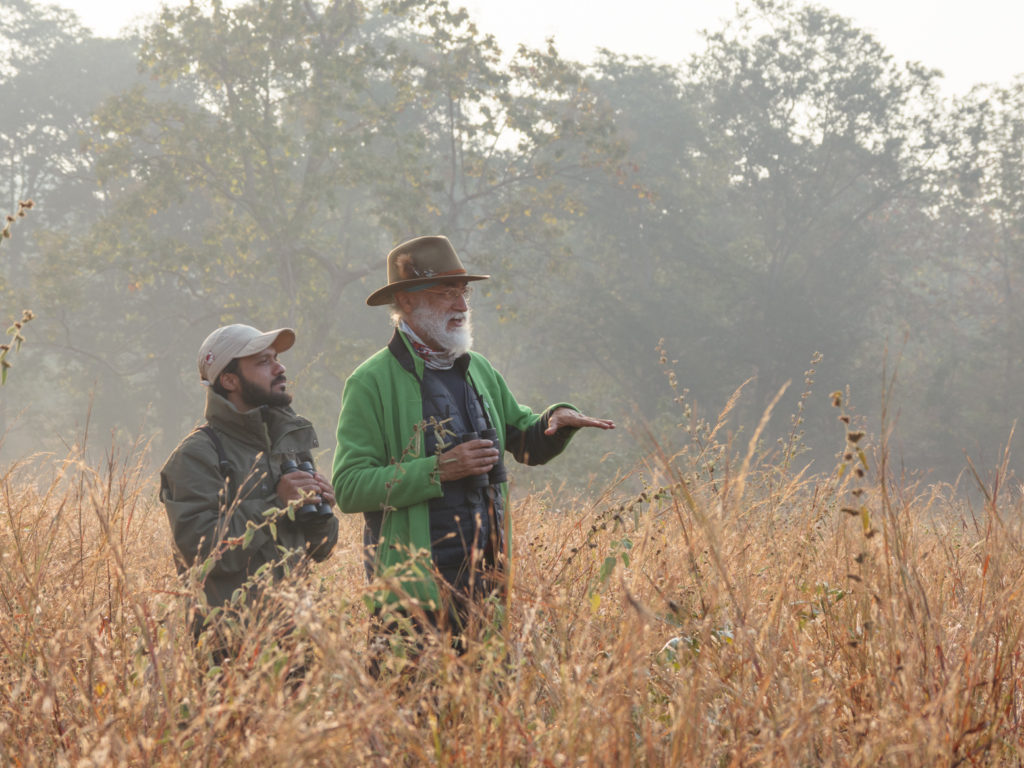 For the discovery of solitude in the heart of India, we have a very special accompaniment: Mandip Singh Soin, the man with the white beard and colourful turban, in his appearance a successful combination of Gandalf and Gandhi. Mandip, with his company Ibex Expeditions, is one of the great pioneers of sustainable adventure tourism in India and organizer of many important Himalayan expeditions. In addition, even one of the first serious mountaineers in his country – he has not only wrested the legendary mountains Shivling and Meru, the first Indian ascent, he has also established modern mountain rescue techniques and drank tea with the Dalai Lama. Mandip knows the mountains and the cultures of India like no other – that’s why he always likes to come to the central hill country, to Madhya Pradesh. “The genius here is that you can do something active in the national parks – trekking, safaris, canoeing. Unfortunately, such things are often prohibited in the national parks of the rest of India. ”

For our voyage of discovery, we have chosen Satpura National Park, one of nine in the state. It is a vast hilly tiger reserve with the reputation of being one of the least developed in India. For just 120 km from the capital, Bhopal, the chaotic Indian driving style requires a good five-hour drive to get to the edge of the national park. We want to make it the big cat and explore this landscape on quiet paws and, who knows, with a little luck actually spy a Bengal tiger. “At the moment we know about two females and one male in the reserve. But we’re more likely to meet a leopard, a sloth bear, or a king giant squirrel, which we see quite often here,” says Aly Rashid.

So we’re walking through the kingdom of the tiger. Also, if you know the statistics and an encounter on foot is unlikely, then a very special feeling mix creeps in as soon as you shoulder the backpack and take the first steps onto the jungle floor. A mix of respect, attention and awe, spiced up with a puff of primeval fear – it could be, who knows!

Tiger Trekking on the Forsyth Trail

Good that Mandip and Aly radiate a calm, as perhaps only Indians can – the yoga hype has arrived, after all, a few thousand years ago. We start our hike from the idyllic village of Pachmarhi, from here you can easily overlook the terrain that will soon absorb us completely: an untouched landscape of hills and gentle peaks, which here and there release a red-orange speck of sandstone. Who counts the summit exactly, comes on seven – from this derives also the name of the national park, Satpura. “Sat” stands for seven, “pura” for summit – the highest of which is Mount Dhupgarh with 1,352 meters. For the next two days, we’ll hike the Forsyth Trail, named in honor of the English adventurer James Forsyth, who campaigned for the preservation of forests as early as the mid-19th century.

In India, you will hardly find street signs, as you may not expect a waymarking. But Aly knows every stone and every tree here, we follow him with confidence into the great forest that inspired Rudyard Kipling’s The Jungle Book. “What’s jungle in Hindi? Jungle! “, Aly informs us gladly, so we actually landed here in the Ur-Wald. Here one looks in vain for lianas and pineapples, the last rain is already two months ago, the soil dried up. But after a few steps already a horde of langurs jumps screaming over our heads. Aly immediately switches to the naturalist mode: “Wavy-Breasted Squirrel!”, “Kingfisher!”, Tirelessly spotting rare birds in the trees, where we only see a pile of leaves.

Off To The Jungle Camp

Only when we put our feet in the still warm sand in our camp on the extensive riverbank, we become aware of what we have not seen the whole day just now: many people. Massive cars. Annoying tuk-tuks. A whole day without honking, without trash next to the road and without the smell of burned plastic in the nose. But birdsong, river noise and occasionally the distant cry of a monkey. India too can be like that: quiet, deserted, idyllic; a stark contrast. At the same time, with the first stars in the firmament, our aperitif, a sweet liquor from the blossoms of the Mahua tree that grows around, also appears. A bit getting used to, but that’s a lot here, also the local definition of camping.

Ready-built tents with beds and bedside tables, a toilet and shower tent with improvised sink with soap and towel and a small bar, the ice cubes for the gin and tonic keeps ready: so in India so tourists are camping. Pardon, glamping is probably the common fashion term for it. And every evening a hot water bottle in the tent bed waits for our cold feet. Getting used to, but quite pleasant.

Encounter with the Tiger

With all the luxuries you can forget the real reason why we came here. He comes back to us the next day after early departure, as we discover after a still sleepy hour hike downstream then suddenly a breakfast of a different kind right next to our way: A pile of leftover offal in the sand. “Tiger kill,” Aly does not hesitate for a long time with the answer, “probably yesterday. Probably a small Samda cattle. “And indeed, all around are fur remains and oversized cat tracks in the sand. From now on, the tiger is no longer just an abstract figure, he is suddenly damned real. You go differently, you look different, you hear differently – we walk here through the jungle book, and Sher Kahn accompanies us.

Arrive : Flight from Delhi to Bhopal (1.5 hours), capital of Madhya Pradesh in central India. Up to the Satpura National Park it is a good five hours by car, driving is not recommended due to the very habituation-needing traffic rules of the Indians and the left-hand traffic. It is best to take a taxi or book an organized tour.

Accommodations: Madhya Pradesh is off the beaten track and is therefore sparsely furnished with accommodation for international tourists. The exception is Bhopal, a 2-million-city, which gained notoriety in 1984 because of the terrible chemical disaster . There is a good standard of hotels, for example the Jehan Numa Palace . In the Satpura National Park, the Reni Pani Jungle Lodge is a luxurious gem in the African safari style. The posh hotels have quite a Western price level, who gets himself in the streets of the cities themselves, gets extremely cheap delicacies for a few rupees, but a good stomach is often required.

Best travel time: Pleasant, dry climate prevails from October to March. Around December, the temperatures are also ideal for outdoor activities such as hiking and biking, but at night it is already quite fresh. From April on, temperatures often get unbearably hot and temperatures regularly rise above 40 ° C. July to September are rainy and humid due to the monsoon.