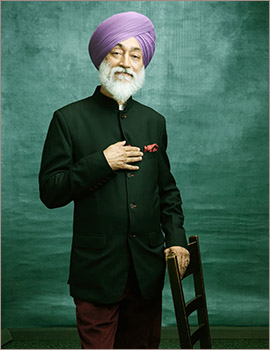 As he stood close to the summit of Black Peak at the age of 15, Mandip knew he was smitten by adventure and the great outdoors and was on ‘the road less traveled. With a Masters’s in History from St Stephens College, Delhi University, he turned his passion into a career. Ibex Expeditions was born in early 1979.

Besides arranging world-class adventure and specialist tailor-made holidays for enthusiasts from around the world, he has personally undertaken expeditions with a diversity that has helped him enhance the professionalism at Ibex. Life’s adventures drew him closer to saving the environment for future generations and his attention turned to ‘making a difference and embracing the advocacy of Responsible Tourism, Environment, and Ecotourism with a deep passion.

Mandip continues exploring and discovering new adventures within India and in distant lands. Having traveled to over 45 countries and all 7 continents, he keeps a keen eye on the changing face of tourism and the needs of the discerning traveler, incorporating this into the Ibex journeys. Ibex organizes/outfits Himalayan expeditions, wildlife safaris, and tailormade deluxe journeys from the northernmost point like Ladakh to the southernmost of the country at the Backwaters of Kerala.

Much of Ibex’s success is attributed to the well-qualified professionals who work hard to provide you with a first-class experience. From choosing the right luxury Camp or a charming boutique hotel to the overall itinerary design, the focus is on delivering an immersive and transformative journey.

The Ibex guides & trip leaders are a bunch of exceptional individuals who are well educated and have a wealth of experience, excel in wilderness skills, and are good-humored. The field staff includes guides, cooks, and porters, ever striving to make the tour successful, braving all weather conditions. Not to be forgotten are the hard-working & sincere office staff who keep the entire operation running. Their enthusiasm, hard work, attention to detail, and willingness to help are valued highly.

Below is a list of some of the diverse adventures & expeditions he has undertaken since 1973.